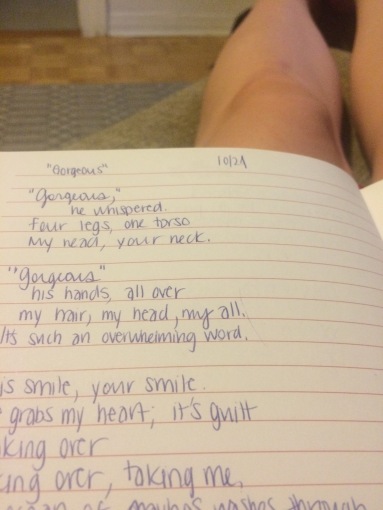 Before I left for Argentina back in 2008, my grandmother, the adorable woman she is, gave me a red notebook, a simple thing with white dots and flowers. She told me she’d noticed how much I loved writing, and thought it would be a good way to capture my experience living in a foreign country for that time, something to look back on in however many years to relive the feeling of the first day, the first month, the little memories that fade with time. I was really diligent about writing in it for the first few weeks, eventually stopping in favor of nights at the bar instead of nights with a notebook, but ever since that day, that notebook has never left my possession. It’s something I’ve been writing in for over six years now, intermittent bursts of inspiration coming like slow waves of emotion. I have sporadic entries in clusters, writing near daily for a month in 2011, then not again till 2012, then not again till early 2014. In my many moves around the city, I’ve debated whether I should get rid of it, but there are so many intimate pieces of me in those pages, pieces of so many different LBs in the past seven years, it’s like a part of me at this point, that little red notebook I never thought I’d fill.

I rarely go back and read old entries, even from the Buenos Aires days, in a large part because they can be very difficult to read. I’ll read sentences or words and just cringe. It’s like watching a bad movie about yourself: the girl fighting to find her way in a foreign country, turns into the girl fighting for a relationship alone, turns into the girl fighting being alone in a big city. All of my mistakes are laid bare in those pages, sometimes before I even knew they were mistakes, and I’ve had physical, visceral reactions to reading certain words, because I can remember how excited that LB was in writing the words down, and I know I’m going to relive her crushing pain when I turn the page. It’s like turning the pages on your own misery sometimes, and for that reason, it’s only in moments where I need to gain perspective that I’ll ever go back to things written in there previously.

Despite knowing it could turn ugly in a line or a page, the other night I found myself compelled not just to casually flip back and find an entry, but to go back to the beginning and read them all. I watched the dates to skip certain pages, the ones I’ll never forget writing, like that night almost a year ago now, where I felt my insides rip apart slowly and completely, barely able to put pen to paper as I sobbed from a guttural and feral place of emotion I’ve